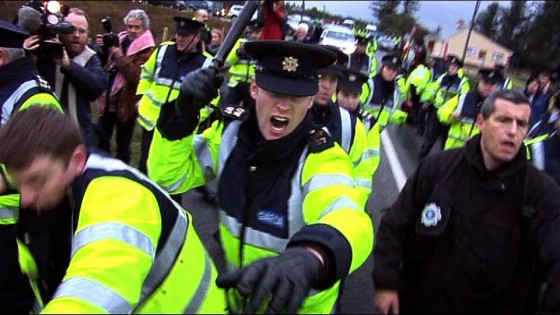 Director: Risteard Ó Domhnaill
Ireland 2009
82 minutes
Cert: 15A
What do people do, when the law prevents them from protecting themselves? That's the question at the heart of The Pipe, a stirring, character-rich documentary from Risteard O Domhnaill about Shell vs. Rossport, Ireland, where the oil company decided to run a gas line, and the community decided otherwise. The Irish don't harbor a lot of affection toward things British, but those behind The Pipe might think fondly of BP, whose recent gulf disaster will add currency and urgency to this charismatic David-Goliath tale.

The film is beautifully composed and valiantly photographed (O Domhnaill, also the d.p., shoots clashes between Rossport villagers and members of the Irish Garda so closely you can virtually feel the rioters' breath in your face). But it's also politically astute: It isn't just one village that's at stake, but democracy itself, especially when the Irish government all but abdicates its role in the case and the Garda essentially assumes the role of corporate muscle. Shell will move on, The Pipe implies, but the wounds left behind on a small community like Rossport -- where neighbor essentially fought neighbor -- will take generations to heal, if at all.

An Píopa (The Pipe) Trailer