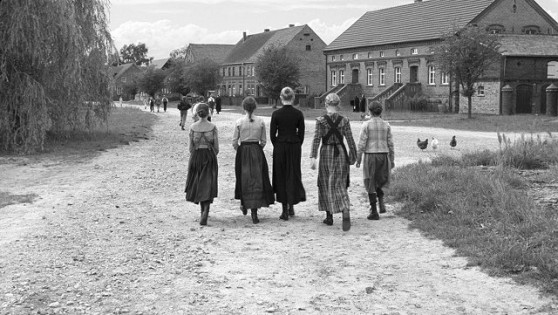 Dir: Michael Haneke
Austria / Germany 2009
144 minutes
Cert: 15A
The White Ribbon marks the high point of a journey that Haneke began over twenty years ago with his remarkable first feature film, The Seventh Continent. This latest work, set in a small farming village in northern Germany on the eve of the First World War, is shot in sparkling, iridescent black and white, a film of shimmering surfaces that conceal a much darker reality. True to his style, this reality is hinted at but rarely shown, and it gradually informs every moment of our watching.

Though an analysis of the roots of Nazism can be read into the narrative, the film has a more universal reach. Haneke maintains that the work is as much an investigation of terrorism as it is of fascism. Both provocative and elegantly executed, this is essential viewing – an examination of how violence can perhaps unwittingly take root in a society that ostensibly believes in other values.