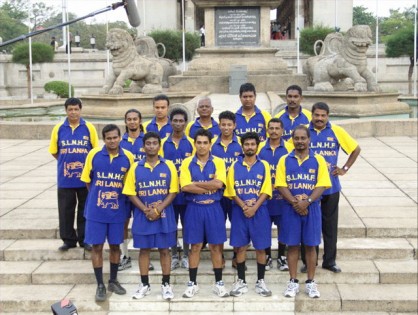 Dir: Uberto Pasolini
Sri Lanka 2008
109 minutes
Cert: CLUB
According to the International Handball Federation, there are 35 recognised member nations of the Asian handball division. Sri Lanka is not one of them. It seems, in fact, that Sri Lankans have very little concept of the sport at all, let alone enough to establish a national team. Yet in 2004, a 23-strong group of representatives of the Sri Lanka National Handball Team infiltrated an international tournament taking place in the suburb of Wittislingen, Bavaria. Unbeknownst to the German organisers, the squad had blagged their way into the contest, not with any view to compete, but with the audacious and outlandish plan to leave their harsh home lives behind in search of a better life.

While Machan handles some delicate social issues, it does so with a sense of humour and frivolity. Rather than exaggerate the poverty that plagues our protagonists, Pasolini astutely conveys a more pragmatic realism. The consequences, of course, are much more serious for this zealous troupe, but what is so refreshing and uplifting about Pasolini’s vision is that he rarely dwells upon such shortcomings. Instead, the first time director eschews the maudlin mentality that is so easily resorted to when raising awareness of immigration. As such, while the group’s hardships are a continual reminder of the films moral motivations, Machan is never overly sentimental and never melodramatic, but brims with charm, compassion and ultimately hope.