The last film of the season, A Prophet, scheduled on 9th December, has been postponed. It will be shown instead on Thursday, 16th. December, in the Seanscoil, starting at 8.15. 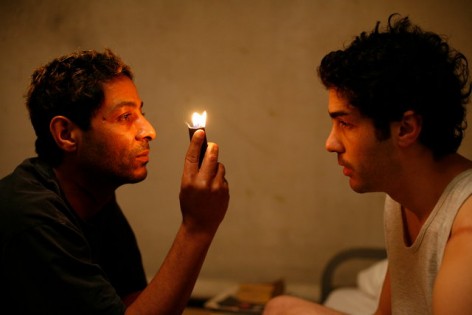 Dir: Jacques Audiard
France 2009
155 minutes
Cert: 16
A Prophet is a blisteringly powerful prison-gangster picture from the French director Jacques Audiard. It comports itself like a modern classic from the very first frames, instantly hitting its massively confident stride. This is the work of the rarest kind of film-maker, the kind who knows precisely what he is doing and where he is going. The film's every effect is entirely intentional.

Audiard has created a long, involved, relentlessly brutal but gripping and thrilling picture; it has the rangy, anecdotal feel of something drawn from real life, but its realism somehow accommodates an eerie supernatural shimmer. Malik has visions which are partly, but apparently only partly, explicable as trauma. The sweat and the machismo are very familiar from the French crime genre, which was revived only recently in the 70s-era Mesrine films. The passing of contraband, the defiant songs and shouts and burning garbage being flung from the high courtyard walls surely also summon up memories of Pontecorvo's The Battle of Algiers. But the movie has its own muscular originality.