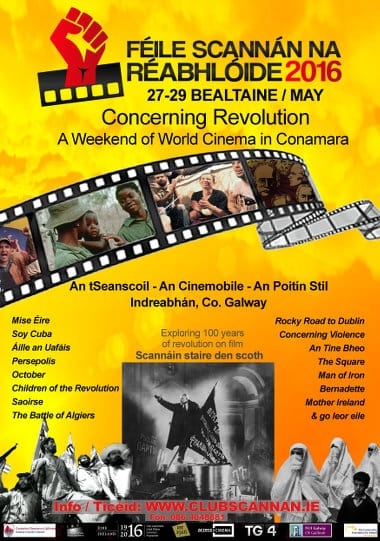 The Gaeltacht based community film organisation Club Scannán Sailearna is holding a film festival in 2016 as part of the 100 year commemorations to mark the 1916 Easter Rising. The festival will take place over three days (27-29 May) in the Seanscoil Theatre, Indreabhán, Co. Galway. Films on the theme of 1916 and the Irish war of independence along with acclaimed films about revolutionary movements around the world will be shown and interspersed with talks and discussion by academics and filmmakers on filmic representations of revolution. The films to be shown include Mise Éire (1959), Áille an Uafáis / A Terrible Beauty (2013), October - Ten Days That Shook the World (1928) and The Battle of Algiers (1966) and the organisers have confirmed the participation of noted film and history experts including Mary Harris, Des Geraghty and Seán Crosson along with filmmakers such as Bob Quinn.

Club Scannán Sailearna is a community film club based at the Seanscoil Theatre, Indreabhán, Co. Galway. Since its foundation in 2007 the club has shown two seasons of world and Irish language cinema annually and has attracted a regular season membership of over sixty people. Special events have included a retrospective of the work of Bob Quinn and a double-bill of ‘Films from the Fringe’ in partnership with the Cinemobile.

Former Director General of RTÉ and TG4’s first Chief Executive Cathal Goan will officially launch the festival, a unique way to mark the 100 year commemoration of the 1916 Easter Rising.

The films scheduled are listed below: