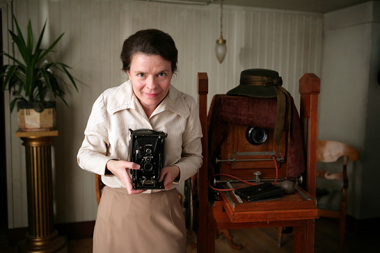 Dir: Jan Troell
Denmark / Finland / Norway / Sweden / Germany 2008
131 minutes - Cert: 15A
Discreet, old fashioned, traditional and altogether admirable, this is Jan Troell in what he does best, a period drama about a woman photographer living in Sweden at the turn of the last century. Paying minute attention to the smallest details, taking its time but never appearing to drag its feet, immensely sympathetic to its heroes and villains alike, this is an intimate family portrait and at the same time a rich canvass of working class life at that particular time.

Told in a precise, authoritative manner, the dense fabric of the plot and all its various ingredients are put together in an exemplarily clear narrative, accompanied by a spectacularly homogenous visual style. Heiskanen's Maria is a striking character, a small, determined, courageous woman, who dares her husband and her fate, fiercely defends her brood and almost gives up her natural talent for images, only for their benefit. Sigfrid, as played by Persbrandt, is a cheerful brute who has trouble controlling either his thirst or his temper. The two, pitted against each other, are the driving force behind a plot which, despite its considerable length, never overstays its welcome. - Screen International