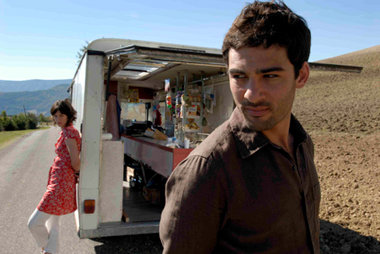 Dir: Eric Guirado
France 2008
96 min. - Cert: Club
The lead actors are hot and the living is easy in the French summertime idyll The Grocer’s Son. Despite more than a few contemporary fairytale elements and extremely pretty leads and landscapes, the second film from French director Eric Guirado is also touching and surprisingly honest, with a genuine eye for character and the small battles of everyday life. As headlined by the excellent Nicolas Cazalé and Clothilde Hesme, this small story of a grocer’s son’s return to his village of birth to take over his father’s shop has all the trappings of a potential crowd-pleaser. The film sold almost 300,000 tickets during its limited summer release in France.

Guirado hit on the subject of his second film after making a series of documentaries for television about people who hit the road for their jobs. Without making a point of it, The Grocer’s Son clearly shows that even in the age of the internet and mobile phones isolated villages and especially the older inhabitants still rely on something as simple as a grocer coming by regularly for their daily needs.

The overall effect is one of a small and optimistic film that is somehow never unrealistic. Credit the screenplay and the luminous actors for making The Grocer’s Son a small but nevertheless delicious summer treat. - Boyd Van Hoelj, European Films