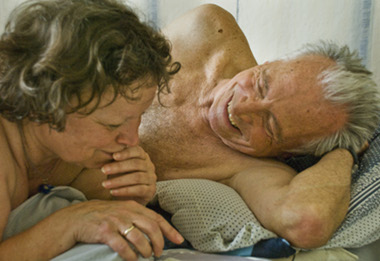 Dir: Andreas Dresen
Germany 2008
98 min. - Cert: Club
Love hurts - even when you’re over sixty. That’s the message of German indie director Andreas Dresen’s tough new drama, which follows with stark handheld directness the confusion, joy and suffering of apparently happy-married Inge, a woman in her mid-sixties who begins an affair with an older man. The camera does not shy away even when things get steamy, but this film draws its strength from its tight dramatic focus rather than any shock value.

The action kicks in quickly: within the first two minutes, home-based seamstress Inge is making out on the couch with Karl (Westphal), a gentlemanly 76-year-old whose trousers she has altered. It’s only later that we realise Inge has a husband - gruff-but-decent Werner (Rehlberg), also in his sixties, who likes to watch videos about diesel engines in the evenings. The catch is that Inge is still attached to her sprightly, still virile husband of thirty years, and leaving him for another man is not going to be easy.