Bernadette: notes on a political journey

Bernadette: notes on a political journey 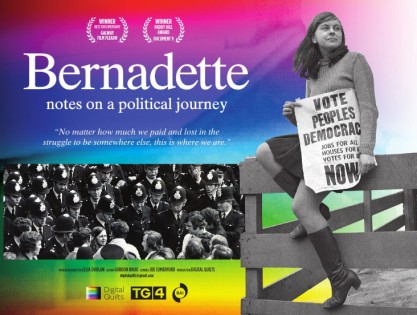 Directed by Lelia Doolan
Ireland
The recently made film, Bernadette: notes on a political journey, will be shown in Seanscoil Sailearna. The documentary is the culmination of some 9 years of work by film producer Lelia Doolan and deals with the life and times of Bernadette Devlin (Mc Aliskey), who was elected at 21 years of age to the Westminister Parliament at the start of the troubles in Northern Ireland. In the aftermath of Bloody Sunday (Jan. 1972) she was suspended from parliament for 6 months, because she physically attacked the Conservative Government Minister Reginald Maudling in the chamber of the House of Commons, for saying that the British soldiers had opened fire in self defence in Derry that fateful Sunday.

Since then Bernadette Mc Aliskey and has been a tireless campaigner over the years in Northern Ireland on issues of republicanism, socialism and feminism. When first shown at the Galway Film Fleadh last July, this film won the accolade as the best documentary of the festival.

Bernadette: notes on a political journey has been made with the support of the BAI and TG4 and is due to be shown on TG4 at 9.30 p.m. on Mon. 30th January. Next Wednesday's screening will afford people the prior opportunity of seeing this important documentary on the big screen.